skip to main | skip to sidebar

About three years ago I cut up about 40 of Laura's old T-shirts and made this: 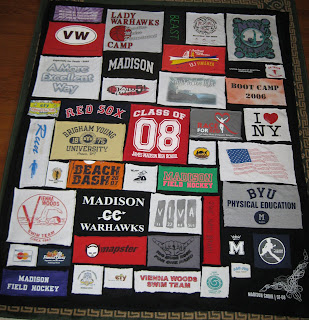 Last month I cut up about 30 of Mikey's old T-shirts and made this: 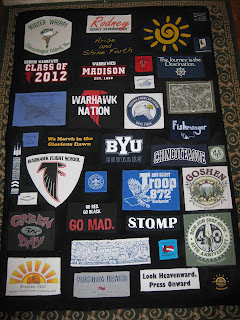 There were a couple of shirts I would have liked to have included but he still wears them.  Since a few of you have asked me how I made them, here goes:

Materials:
about 2 yards of 60 inch wide solid colored polar fleece (4 yards of you want to make it double thickness)
6-8 yards of Pellon Wonder Under--I got mine on overstock.com
Iron
Rotary cutter, mat and ruler
Thread
T-shirts

Directions:
Prewash and then cut 60" wide fleece (the solid color of your choice) to the desired size.

Cut out enough wonder under to cover each logo and how much of a border you want around it.

Iron the wonder under paper side up to the wrong side of the logo.

Using a rotary cutter and ruler cut out the wonder under backed logo.

Lay out your logos on a single layer of fleece.  Play with them until you like the arrangement.  (On Mikey's I found a couple of shirts late in the game and kind of forced them to fit on the bottom right hand side making it a little off.)

Once the logos are placed to your liking, remove the paper backing and iron them logo face up on to the fleece directly where it lays.  I did mine on a hard wood floor and it was fine underneath the fleece.

Once they are all ironed on, for extra stability, sew about a 1/4 inch around the edges of each of them.  I used black in the bobbin to match the fleece and a neutral color to match the t-shirt.

For a light blanket, you're done.  But if you want extra thickness you can baste a second second layer of fleece to the top layer along the edges and then sew around the edges.

MK has about 50 t-shirts stock piled already....and she still has a year before she graduates.  By the way, Bruce thinks I should take a picture of each quilt and put them on t-shirts;)