skip to main | skip to sidebar

Back in the Day

In 1989 we purchased our first house on 405 Yeonas Dr.  It was totally trashed.  5 dogs and 3 cats had the run of the place.  Areas of the wall to wall carpeting were urine soaked which rotted the hardwood floors beneath.  Nothing was updated.  But after praying about it, it just felt right so we took the plunge and bought it. The basement bedroom was shared by our three boys.  The half bath they used was infamously dubbed the mexican prison bathroom.  It was nasty.  We made little improvements here and there and made many happy memories in the ten years we lived there.  The market had stayed stagnant so that we didn't make anything when we sold it to our friends, the Gardners.  They lived there for five years and made some improvements and also went on to build their dream house and move on.  Enter the Walkers.  They are also friends of ours.  We have enjoyed visiting them over the five or six years they've lived there to see all the improvements slowly take place.  They just listed it.  We are absolutely amazed at the transformation:  http://www.dropbox.com/gallery/27173089/1/House?h=487288#/

The kids didn't have school today, so Mikey and Dad decided to go to the Auto Show at the DC Convention Center.  But since that would have bored us silly, MK and I got some friends together and hit up Georgetown instead.  We had an awesome day with Olivia and Kristin Hartt, and Janessa, Ellen and Nathan James.  MK and Janessa at Anthropologie: 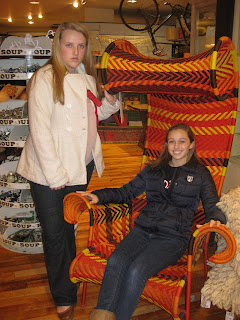 Look, Ma, no line!  I have probably driven by G-town cupcakes 10 times and have refused to go to the trouble of parking only to wait in the ridiculous line.  We couldn't believe our eyes when we showed up to this: 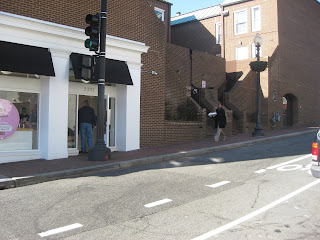 There were more employees behind the counter than there were customers! 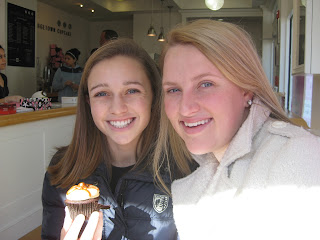 I have to admit they were ridiculously good--the salted caramel being my fave. 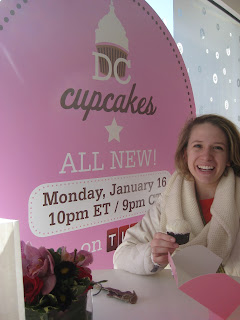 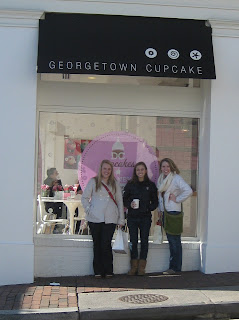 After cupcakes we checked out some more shops including Second Time Around where we found some cute dresses on the cheap for MK.  Then we ate lunch at Johnny Rockets where Dad and Mikey met up with us.
Posted by Momma Nielson at 3:08 PM No comments:

Wow, the big eight-oh.  My sister, Lori, threw an awesome party at Clyde's in Alexandria. 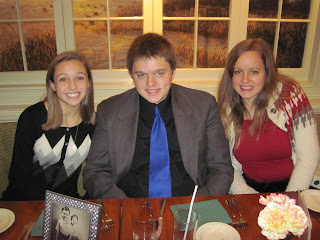 The girls were waiting to be served their crab cakes.  Mikey got the chicken.  He inherited his dislike for seafood from his G-Ma. 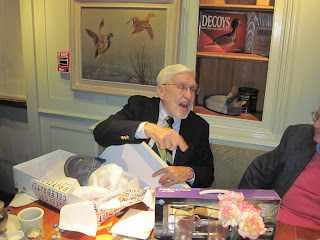 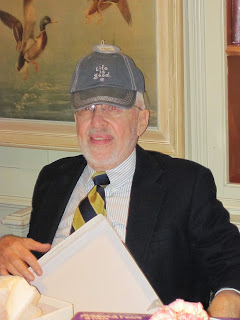 The center of attention. 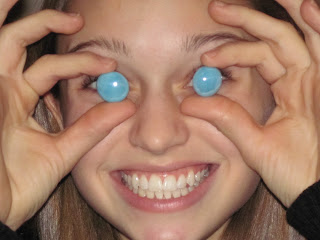 MK was having trouble keeping her contacts in. 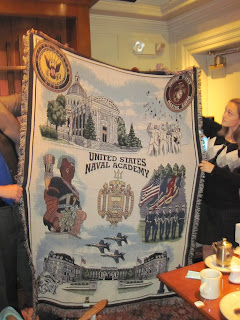 An awesome gift from my cousin, Kathy. 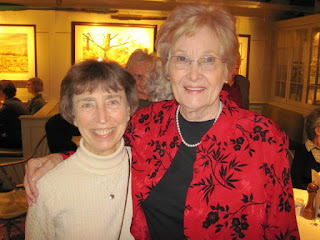 G-ma and Libby.  Besties from way back in the day, when they were little girls getting into scrapes. 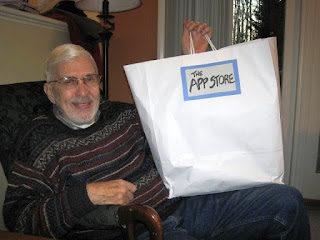 The next day we surprised Grandpa with a bag of apps..... And this guy: 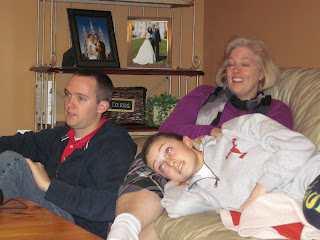 Jeff flew in for an interview in Richmond.  We had a blast with him home for the 2 short days he was here. 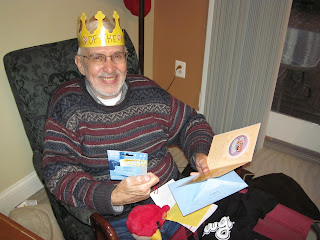 On Christmas Eve we always have G-ma and G-Pa over for a Christmas buffet.  The missionaries also came this year along with our friend, Scott. 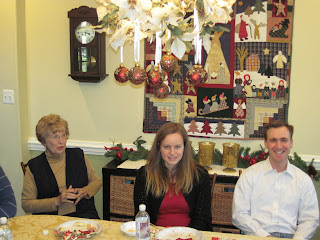 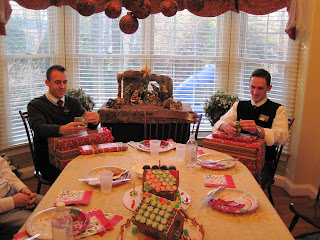 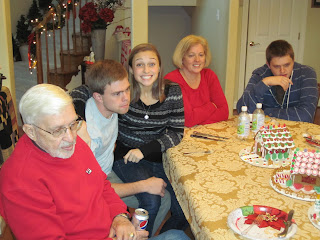 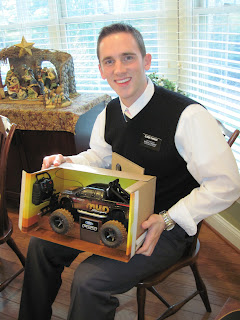 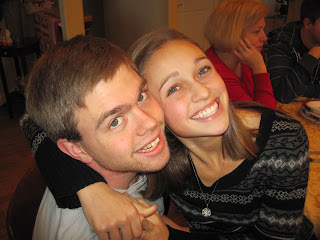 We loved having Tom home.  He made us two racks of the best ribs I have ever had using his original dry rub recipe topped off with J-Dawgs sauce.  I also had him inject our ham with a pineapple brown sugar honey concoction that ended up getting squirted all over the kitchen.  It would go in one spot and find another way out.  Sort of like a geyser. 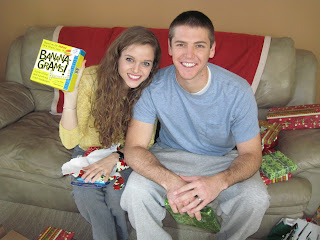 These two showed up on Christmas eve night.  First stop was the temple lights on the way home from BWI.  MK, Mikey and I also went downtown with them to do a little sight seeing.  Jordan spent every minute he could flying his helicopter.  Everyone got one.  The air space in our family room kind of reminded me of Grandma Nielson's multitude of hummingbirds at her feeders.  J&L also did some running while they were here.  And Laura and I did a little shopping in G-Town.  We found some great bargains and in the small world department, ran into Marilyn and her girls.  The most fun we had was playing a game called Buzzword.  Bruce and Tom were ridiculously good at it! 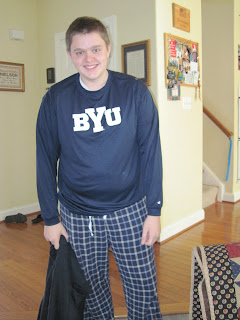 Mikey wearing his gift from Laura.  Fingers crossed that he gets in.  It was kind of sweet going to church before opening presents this year.  Of course we all came back and changed into something more comfy. 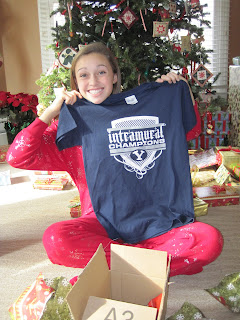 MK with the most coveted shirt at BYU.  At least when it's won.  Laura got it for her through her job as the intramural secretary:)  Jordan is still trying to legit win one. 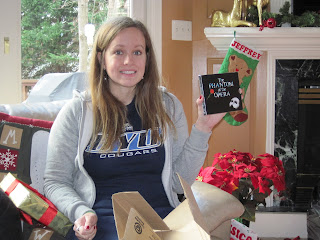 Jess and her Phantom CD. 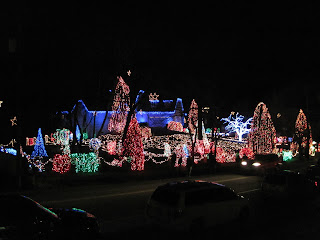 I can never go back here.  Looking at the picture makes me think of only one thing.  Having to go pee.  One of my offspring who will remain nameless (but her initials are MK) really needed to go.  This is a girl who I don't think has ever gone to the bathroom at school.  She was born with a bladder of steel so it came as quite a surprise to me that she felt like she would explode if she didn't find a potty.  Up the hill from this house is a nursing home.  As a family was coming out the door we slipped in.  She found a ladies room near the entrance but it was out of order.  Did that stop her?  Of course not.  She did her business (sans flushing) with me waiting guard at the door.  I was sure we were going to get busted.  It was a relief (in more ways than one) when she was finally done.  That is until we made our way to the exit and discovered that we couldn't get out.  It had a punch key code and we were trapped.  UGH!  I tried the door anyway.  The alarm went off.  We stood there with red faces while a nursing home worker looked at us with disgust in his eyes and let us out. 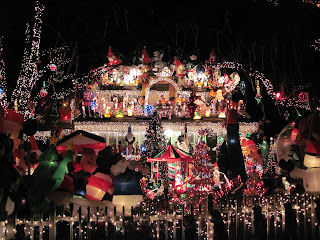 We have visited the King of the Inflatables house at least 5 years in a row.  It is the ultimate in tacky.  It is fun to walk around and take it all in. 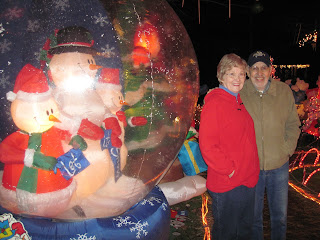 G-ma and G-pa D love the tradition of the lights and warm krispy kreme donuts afterward. 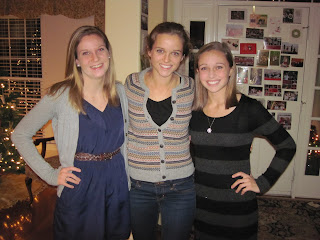 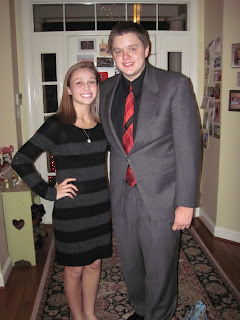 After the dance we had the youth over for pancakes and eggs and sausage.  They didn't stay as long this year since Nick brought fireworks so after eating they went out to the cul de sac to set them off.  Then they all went home.  Thank goodness for 11:00 church this year!